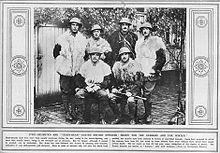 Our Army has now followed the French by adopting steel helmets, calculated to stop shell-splinters and shrapnel. Even in cases of extreme risk, not only has death been avoided, but injuries have been confined to bruises or superficial wounds. Cases have occurred in which the wearers have been hit, but saved by these helmets from what without them would have meant certain death. The fur coats, as they did last year, mean mitigation of the rigours of winter. The French helmets are known as “Adrians,” after their inventor. (Photo by Illustrations Harrow).

At the outbreak of the great war (WW1) none of the combatants provided steel helmets to their troops.

Soldiers of most nations went into battle wearing cloth, felt, or leather headgear that offered no protection from modern weapons.

The huge number of lethal head wounds that modern artillery weapons inflicted upon the Infantry led them to introduce the first modern steel helmets in the summer of 1915.

The first French helmets were bowl-shaped steel “skullcaps” worn under the cloth caps. These rudimentary helmets were soon replaced by the Model 1915 Adrian  designed by August-Louis Adrian.

The idea was later adopted by most other combatant nations.

At about the same time, the British War Office had seen a similar need for steel helmets.

The War Office Invention Department was ordered to evaluate the French design. They decided that it was not strong enough and too complex to be swiftly manufactured. British industry was not geared up to an all-out effort of war production in the early days of World War I, which also led to the

John Leopold Brodie (1873-1945), born Leopold Janno Braude in Riga, was an entrepreneur and inventor who had made a fortune in the gold and diamond mines of South Africa, but was working in London at that time. A design patented by him in August 1915 offered advantages over the French helmet. It was constructed in one piece that could be pressed from a single thick sheet of steel, giving it added strength and making it simple to manufacture. Brodie’s patent deals mainly with the innovative lining arrangements; an engineer called Alfred Bates of the firm of Willis & Bates of Halifax, manufacturer of Halifax claimed that he was asked by the War Office to find a method of manufacturing an anti-shrapnel helmet and that it was he who had devised the basic shape of the steel shell. Aside from some newspaper articles, there is nothing to substantiate Bates’s claim.

Brodie’s design resembled the medieval infantry Kettle Hat unlike the German Stahlhelm which resembled the medieval sallet The Brodie had a shallow circular crown with a wide brim around the edge, a leather liner and a leather chinstrap. The helmet’s “soup bowl” shape was designed to protect the wearer’s head and shoulders from shrapnel projectiles bursting from above the trenches. The design allowed the use of relatively thick steel that could be formed in a single pressing while maintaining the helmet’s thickness. This made it more resistant to projectiles but it offered less protection to the lower head and neck than other helmets.

The original design (Type A) was made of Mild Steel  with a brim 1.5–2 inches (38–51 mm) wide. The Type A was in production for just a few weeks before the specification was changed and the Type B was introduced in October 1915. The specification was altered at the suggestion of Sir Robert Hadfield  to a harder steel with 12% Manganese content, which became known as “Hadfield steel”, which was virtually impervious to shrapnel hitting from above.[ Ballistically this increased protection for the wearer by 10 per cent. It could withstand a .45 caliber pistol bullet traveling at 600 feet (180 m) per second fired at a distance of 10 feet (3.0 m).[11] It also had a narrower brim and a more domed crown.

The original paint scheme, suggested by Brodie, was a mottled light green, blue, and orange camouflage but they were also painted in green or blue-grey.

The first delivery of the Brodie to troops took place in September 1915, at the rate of 50 per battalion. Initially, there were far from enough helmets to equip every man, so they were designated as “trench stores”, to be kept in the front line and used by each unit that occupied the sector. By early 1916, about a quarter of a million had been made, and the first action in which the Brodie was worn by all ranks was the Battle of St Elio , in April.

Although the helmet’s benefits were recognised, there was criticism from several quarters, including General Herbert Plumer , who said that the helmet was too shallow and too light-reflective, its rim was too sharp, and its lining was too slippery. It was decided to introduce a number of improvements, and from May, supplies of the modified helmet, designated the Mark I, began to arrive. It had a separate, folded rim, a two-part liner, and matt khaki paint finished with sand, sawdust, or crushed cork to give a dull, non-reflective appearance.

By the summer of 1916 the first million helmets had been produced, and they were issued to all troops.

Troops from other countries also used the Brodie helmet, including the USA when they began to deploy in France late in 1917. The U.S. Government initially purchased some 400,000 helmets from Britain. From January 1918 the U.S. Army began to use helmets manufactured in the U.S. and these helmets were designated M1917.The steel helmet was known to the troops as a “tin hat”, or, for the officers, a “battle bowler” (from bowler hat).

By the end of the war some 7.5 million Brodie helmets had been produced, including 1.5 million M1917 helmets, for use by American forces.

From 1936, the Mark I Brodie helmet was fitted with an improved liner and an elasticated (actually, sprung) Webbing chin strap. This final variant served until late 1940, when it was superseded by the slightly modified Mk II, which served the British and Commonwealth forces throughout World War II. British paratroopers and airborne forces used the Helmet Steel airborne

Several Commonwealth nations, such as Australia ,New Zealand ,Canada,  and South Africa , produced local versions of the MK II, which can be distinguished from those made in Britain.

During this period, the helmet was also used by the Police, the fire brigade and Air Raid Protection wardens in Britain. The helmets for the ARP wardens came in two principal variants, black with a white “W” for wardens and white with a black “W” for Chief Wardens; however numerous different patterns were used. A civilian pattern was also available for private purchase, known as the Zukerman Helmet , which was a little deeper but made from ordinary mild steel. 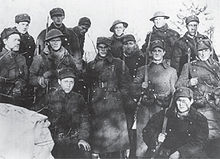 Norwegian soldiers at the Battle of Hegra Fortress in 1940, a few wearing Mark I helmets

The Norwegian Army adopted the Mark I helmet in 1915, eventually importing a total of 10,000 examples. Some of the imported helmets had a helmet plate with the Norwegian Crest  affixed to the front. The Mark I remained in Norwegian service throughout the interwar period, alongside Swedish helmets acquired in the 1930s. The helmets were among the equipment issued to Norwegian forces in World War II, seeing service in the 1940 Norwegian Campaign  against invading German forces.In the first post-war years, the Mark I helmet remained in service with the Norwegian Army, alongside the American M1 Helmet Swedish helmets, and Stallhelms  left behind by the capitulated 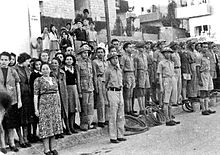 Jewish Civil Defense group in Jerusalem in WWII. The group served as ARP Fire Wardens, equipped with water hoses and buckets, some wearing FW (Fire Watcher) Brodie helmets. Men are in uniform while women wear plain clothes. Composer stands next to the woman with a black sweater.

In 1944, the British supplemented it with a significantly modified design, known as the MK 111 Turtle.

The U.S. Army used the basic Brodie-patterned M1917 helmet until 1942 with some modifications, which included a totally new liner and canvas chin strap. It was finally superseded by the M1 in 1942 and passed down to civil defence.

The helmet was the inspiration for the name of the Memorable Order Of Tin Hats  (or the MOTH), a brotherhood of ex-front-line soldiers founded in 1927 by Charles Evenden 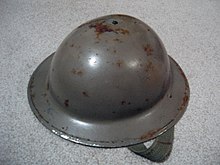 A British helmet dating from the Second World War, probably a Mark II. The grey finish suggests that it was issued to one of the civil defence services. 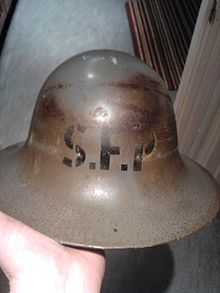